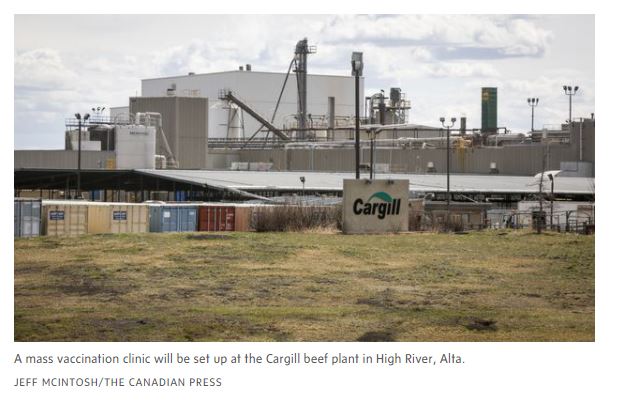 Alberta intends to offer vaccines to about 2,000 meat-packing employees at their worksite this month as part of an effort to target citizens most at risk of contracting the coronavirus and who might otherwise struggle to access or accept shots.

A mass vaccination clinic for employees at Cargill Ltd.’s High River operation, which was the site of the largest workplace outbreak of COVID-19 in Canada, is scheduled to start around April 20, according to one of the doctors leading the project. Employees at Cargill’s Case Ready facility in Calgary may also be included.

Physicians across the country are urging provincial governments to rejig their vaccination plans to prioritize essential workers such as those in warehouses and meat-packing facilities. In Alberta, meat-packing operations have been especially vulnerable to COVID-19 as employees work in tight quarters and face language and cultural barriers. The Cargill plan, organized in part by Calgary physician Annalee Coakley, would be Canada’s first major workplace vaccination effort.

“It is imperative that we protect them with a vaccine,” Dr. Coakley said. “Especially now, where we are entering the third wave.”

About 2,100 people, largely immigrants, work at Cargill’s operation in High River. They will be offered doses of the Pfizer vaccine and Dr. Coakley believes the team can deliver the first round of injections in about three days. Cargill, she noted, runs flu clinics in its High River plant, which means it has the infrastructure, such as vaccine freezers, to support the COVID-19 immunization drive. Cargill also has its own team of nurses who will help inject employees.

Dr. Coakley is working with organizations like the Calgary Catholic Immigration Society and the Alberta International Medical Graduates Association to help translate forms and navigate language and cultural barriers.

Setting up workplace vaccination clinics at places such as Cargill is important, experts argue, because labourers in these environments are most at risk for contracting the virus and face multiple barriers when accessing health care. Many, for example, work multiple jobs, making scheduling difficult. They often live in crowded homes, which can fuel spread in the community. Further, the diverse work force is more likely to participate when people and agencies they trust are involved.

Kate Mulligan, a professor at the Dalla Lana School of Public Health at the University of Toronto, wants other provinces replicate Alberta’s Cargill strategy.

“The story of COVID really is the story of work,” she said. “Until we really recognize that, we won’t be able to make significant progress.”

Scott Moe, the Premier of Saskatchewan, has been reluctant to prioritize frontline workers because he believes it will slow the vaccination campaign. However, on Wednesday, Mr. Moe said his government will consider vaccinating workers at large sites, regardless of their age.

“Maybe we have some mobile capacity to address some of these folks,” Mr. Moe said during an oil and gas conference. “It would help us to maybe just lessen some of the risk of our younger folks contracting COVID and potentially ending up in the hospital.”

In Mississauga, councillors on Wednesday unanimously voted to support mobile vaccination clinics, according to Carolyn Parrish, one of the municipal politicians pushing the strategy. The mobile clinics would take vaccines to “large factories, warehouses, logistics companies and packaging facilities as well as teachers and other front line workers” regardless of age, she said on Twitter.

The coronavirus infected at least 2,800 meat-packing workers across Alberta during the pandemic. Roughly half of Cargill’s workers in High River contracted COVID-19 last spring. The original outbreak is linked to three deaths: employees Bui Thi Hiep and Benito Quesada; and Armando Sallegue, a senior who lived with his son who works at Cargill and contracted COVID-19. The High River operation is, once again, home to an active outbreak. So, too, is Cargill’s facility in Calgary, according to the province’s outbreak list.

Cargill, in a statement, said it wants to facilitate vaccinations for its workers without infringing on the priority for essential health-care workers and others at extreme risk.

“Our response throughout this pandemic is guided by our values – putting people first and doing the right thing,” Jon Nash, the global lead for Cargill’s protein and salt business, said in the statement. “We have been unwavering in our commitment to protect the health and safety of our employees, who are working tirelessly to ensure millions of people have food to eat. We are applying these same values when it comes to vaccinations.”

All meat-packing employees in Alberta will officially be eligible to receive vaccines in the next phase of the province’s rollout plan, expected to take place in April and May. They are prioritized alongside residents and staff at congregate living and work settings at risk for large outbreaks, including correctional facilities, homeless shelters, and group homes for people with disabilities. Front-line police and provincial sheriffs are also in this category.