Calgary has become one of the main landing spots for Afghan refugees in Canada,and one Calgary non-profit agency in particular is especially well-suited to helping produce as soft a landing as is possible for thousands of traumatized people.

The Calgary Catholic Immigration Society (CCIS) is hosting 135 people who escaped Afghanistan and landed in Toronto, before making their way to Calgary.

"These are people with a strong Canadian connection," said CCIS CEO Fariborz Birjandian, who is the co-chair of the National Afghan Refugee Settlement Project. "That means they worked with the Canadian Armed Forces, the Canadian embassy consulate as well as Canadian NGOs, so in the eyes of the Taliban they are the enemy."

Calgary is the second Canadian hub for the Afghan refugees which means the city will see upwards of 6,000 people in the next four months who were initially flown to safety in the U.S.

CCIS has helped thousands of refugees from all over the world adapt to life in Calgary. But Birjandian says people who left from Afghanistan are different than those who came from Syria.

He said many Syrians fled their country, then settled in refugee camps in other parts of the world for months or even years. Canadian officials then visited those camps to review applicants.

By contrast, Afghans have only had days to process the violence that the rest of the world watched on news clips at the end of August.

"From the time these people left their homes, from the time they came to Canada or the United States was less than 24 hours," said Birjandian. "So you can imagine the mental shock and the trauma one could go through leaving everything behind basically with only the clothing on their back."

The refugees here still fear the Taliban and don't want their names or image published so their families that remain in Afghanistan aren't targets. Fatema escaped with her husband and three young children. They've been in Canada since August 27th and escaped Kabul two days before massive crowds gathered at the airport.

"My family members were there," said Fatema. "I have lost three of my cousins in the same day when the explosion happened in the gate of the airport and that was depressing news for us."

It's been a struggle but the family is looking forward to settling in western Canada.

"Yah we are going to stay in Calgary," she said. "(We) find the people here very kind and calm to us."

Kelly Ernst is the vice-president of vulnerable populations at the Centre for Newcomers and said upwards of 17 agencies are gearing up to help Afghan people when they arrive.

Right now immigrant agencies are in need of funds and clothing for the refugees of all ages. Information about donations can be found online at www.ccisab.ca 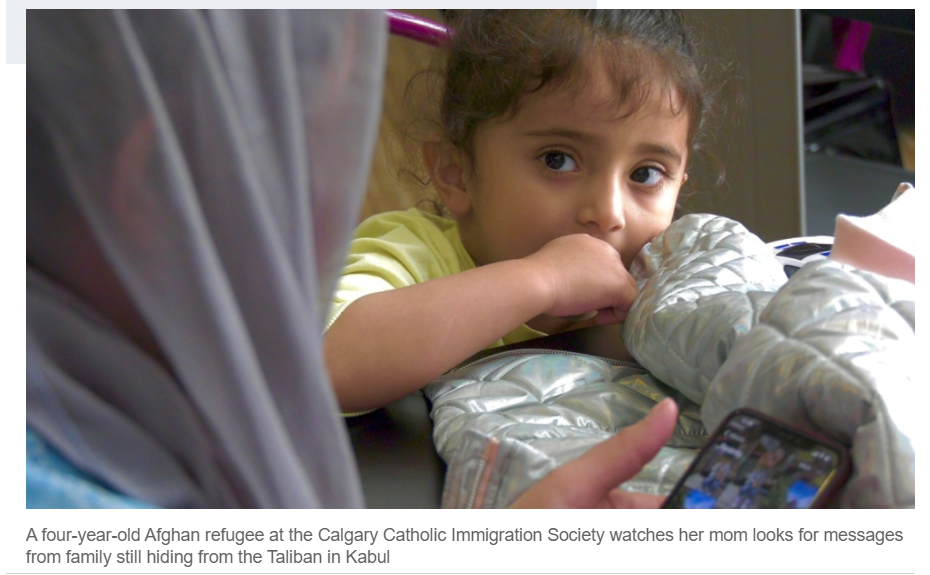