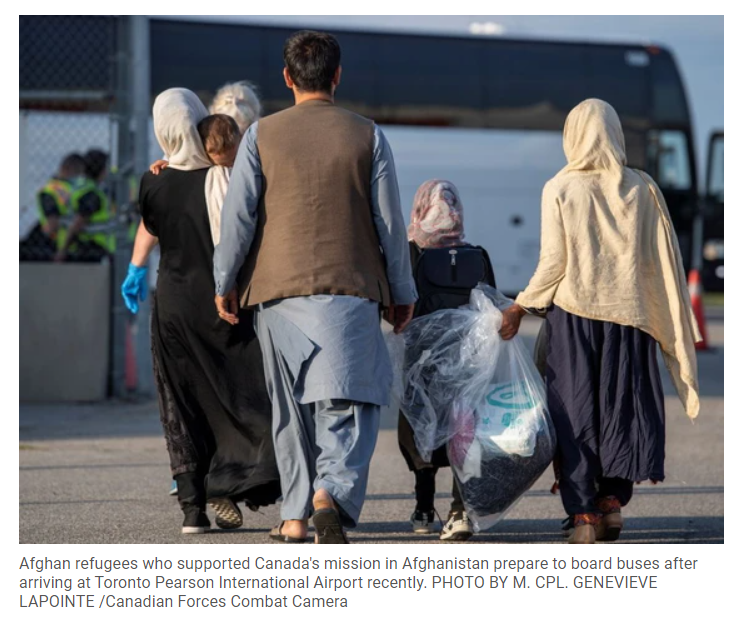 Alberta has welcomed its first group of Afghanistan refugees who were able to escape the Taliban and fly into Canada.

Fariborz Birjandian, CEO of Calgary Catholic Social Services, said 60 have made their way to Calgary and 20 have entered Edmonton so far. He expects around 5,000 refugees to be settled in Alberta over the next few months in Edmonton, Calgary, Red Deer, Medicine Hat, Lethbridge and Brooks.

Canada managed to fly about 3,700 Afghanis to safety in late August before evacuation efforts were ended. The evacuations were rushed due to the sudden rise to power of the Taliban last month following the decision by the United States to remove its forces from the country. Birjandian said around 40 or 50 per cent are children.

“This was urgent. It was a matter of life or death for these people. They had to get out,” said Birjandian. “I think again, basically Canadians, we owed it to these people because they put their lives on the line working with Canadians. We know how the environment is and how the Taliban looks at people that work with foreign groups and foreign governments, to them they’re all infidels and they should all be killed.”

Although it’s a good thing Canada has been able to evacuate some refugees, Birjandian said a lot of them will be struggling once they arrive and settle into the country.

“You just ran out of your home, go through that crazy situation at Kabul airport, get to the plane and leave with yourself, with your wife and your two or three kids and then you look back and see you left all the other people behind — mothers, brothers, sisters and it’s very hard for anybody to imagine unless they’ve gone through that process,” he said.

Refugees have been flying into Toronto and quarantining in one of five hotels, said Birjandian. He added this group is different because immigration paperwork hasn’t been done, so they are having families complete these forms while serving their COVID-19 quarantine in the hotel.

As of Saturday, Calgary was made a point of entry for refugees where the two-week quarantine and immigration forms will be done in Alberta, said Birjandian.

Once paperwork is complete and the quarantine period is over, refugees are then connected with the local agency that will help them integrate into Canadian society. In Edmonton, Edmonton Catholic Social Services (ECSS) is taking the lead on this because Catholic Social Services agencies in the province are contracted to help resettle government-assisted refugees.

Kathryn Friesen, director of immigration and settlement services at ECSS, said their role is to set up people’s lives for them in Canada. She said they do everything from finding temporary accommodation, setting up Alberta health-care cards, social insurance numbers, opening bank accounts, finding permanent accommodation, registering children in school and more.

Friesen said ECSS is not sure when more refugees will be coming or how many will come, but she said they are ready to respond once more start entering the community.

If the community would like to support the local relief efforts for Afghan refugees who are being resettled across central Alberta, they can donate online at cssalberta.ca and those interested in volunteering to help in the resettlement of Afghan refugees can email as there will be opportunities in the coming months.

“We really appreciate how interested the community is in supporting the Afghan refugees, we’ve received a lot of inquiries,” said Friesen. “We also want to express our support for those who are struggling right now, who may have family members still left in Afghanistan and they’re very concerned, rightfully so, about their well-being and it’s a difficult time for many, many people.”

Tweet
Tags:
Afghan
Calgary chosen as port of entry for Afghan refugee...
Members of Calgary's Afghan community to rally for...