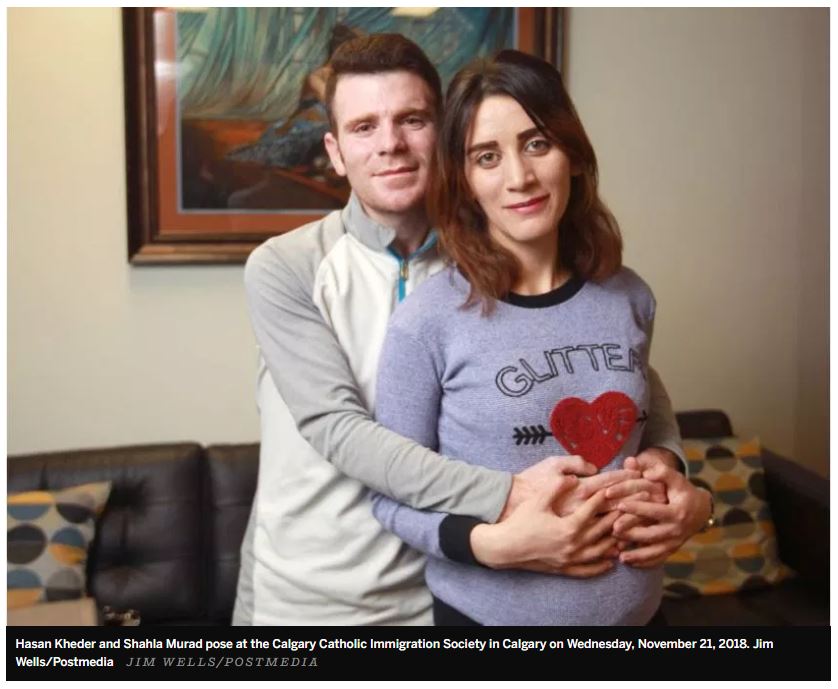 Less than a year after arriving in Calgary, Shahla Murad and Hasan Kheder are not only prepared for another Canadian winter but are also filled with excited anticipation — for one very special reason. “Our baby is due in January,” says the 21-year-old Murad with a shy smile. “It’s a boy.”

On Dec. 14, 2017, the young couple came to the city with nothing more than hope, that life would give them a second chance to enjoy the simplest things we all too often take for granted: a feeling of safety and security. “They have helped us so much,” says Murad of the staff and volunteers from Calgary Catholic Immigration Society (CCIS), one of the country’s largest refugee agencies. “Everything we needed, they made sure we had.”

Murad and Kheder, 23, are Kurdish-speaking Yazidis from northern Iraq, followers of a religion that blends elements of many faiths, including Christianity and Sufism, an esoteric strain of Islam. Yazidis — a faith one must be born into — have been persecuted for generations in their home country, despite a reputation for being a peaceful people. There are less than one million Yazidis in the world today, most of them in northern Iraq. In August of 2014, followers of the Islamic State (ISIS) attacked their main town of Sinjar, at the foot of Sinjar mountain. While tens of thousands escaped by fleeing onto the mountain, thousands were killed or captured, while many of the women and girls were sold into slavery, in markets in Iraq and Syria.

In recent years, Canada has welcomed almost 1,200 Yazidis, mostly women and children. Rather than dispersing them throughout the country, however, those genocide survivors were sent to Calgary, Toronto, London, Ont., and Winnipeg to be part of special refugee programs. The reason for this, says CCIS executive director Fariborz Birjandian, is because they are a unique refugee population. “Their trauma is still so new,” he explains, “and we had to find a different way of helping them.”

The Calgary Catholic Immigration Society (ccisab.ca) is one of 12 recipients of the 2018 Calgary Herald Christmas Fund, now marking its 28th year. The brainchild of Herald newsroom employees in 1991, the fund has raised nearly $27 million for local social agencies addressing critical needs in the community. Each year, a volunteer committee selects worthy charities from more than 100 applications, featuring their stories in the Herald and providing readers with an opportunity to help out.

Working with refugees and their families for more than 35 years, the immigration society has helped tens of thousands of new Canadians find safe and secure accommodation. It also provides a variety of services to help them successfully integrate into the community with everything from English classes and parenting courses, to computer training, interview preparation and connections to potential employers. The society’s Centre for Refugee Resilience has been partnering with Mosaic Refugee Health Clinic’s Refugee Primary Health Care Initiative to provide holistic care to Yazidis. The organization’s share of the Christmas Fund monies raised will go to supporting Yazidi refugees through the crucial first few months of their arrival and resettlement.

Birjandian, who came to Canada as a refugee from Iran nearly three decades ago, readily admits that the Yazidis now under his care are among the most challenging newcomers he’s seen in his several years at the helm of CCIS. “Most governments were afraid to touch this group,” he says. “They’ve seen the unimaginable; some of the women witnessed their husbands being killed.” Earlier this year, Birjandian and his team’s herculean efforts were featured in a New York Times article, which detailed some of the atrocities experienced, along with the many symptoms of post-traumatic stress disorder (PTSD) the Yazidis are now coping with.

Jill Edgington Kirby, team lead of CCIS’ Centre for Refugee Resilience, agrees. “Most refugees have time in a camp, where often the trauma settles out, but this group came straight over,” says Edgington Kirby, who has a decade of experience working with survivors of torture. “Their trauma is very activated. Also, most of them have experienced the trauma directly.” Having a larger team, she adds, has been key to giving them the tools to better help those victimized. “We anticipate we’ll be working with them for a long time, as they become ready for therapy.”

One can’t overstate the extent of the trauma that the 260 Yazidi newcomers to Calgary — and the 100 more or so expected to soon arrive — have experienced. When ISIS trucks rolled into their towns and villages in August of 2014, the militants separated the men from the women and children. Some men were executed in front of their wives and children, while others were taken away never to be seen again. Boys were forced to be child soldiers, while women and girls often became the sexual slaves of ISIS members, suffering repeated rapes and other forms of brutality. Images of the plight of the Yazidis on Sinjar mountain alerted the world to the genocide and helped push the United States to join the military fight against ISIS.

For Murad, the expectant first-time mother, the losses are impossible to fathom. When asked how many immediate and extended family members she lost, she quietly answers: “More than 75. But I don’t know for sure how many are dead and how many are still prisoners of ISIS.” Current estimates have more than 3,000 Yazidis, mostly women and children, still being held captive.

Despite such a challenging population under his care, Birjandian is robustly optimistic for the future of these special newcomers to our city. “We’re here to tell the world, yes, it can work if you do it right,” says Birjandian, who hopes to bring to Canada other immediate family members of the newcomers. “I estimate that 80 per cent of them will be working within six months.” Murad and her husband Kheder, as one example, spoke no English when they arrived here less than a year ago; today, their understanding of the English language and their ability to express themselves clearly and eloquently is more than impressive.

While she and her husband have miles to go in their healing process, Murad also confesses to a big ambition: “I want to be a lawyer,” she says with another shy, but confident and determined, smile. “I want to help people.” Knowing what she has already survived, one can’t help but also feel confident for the young woman who, only a year ago, had little hope for the future, let alone even know she’d find salvation in Canada.

To read other Christmas Fund stories, go to calgaryherald.com/tag/calgary=herald-christmas-fund-2018