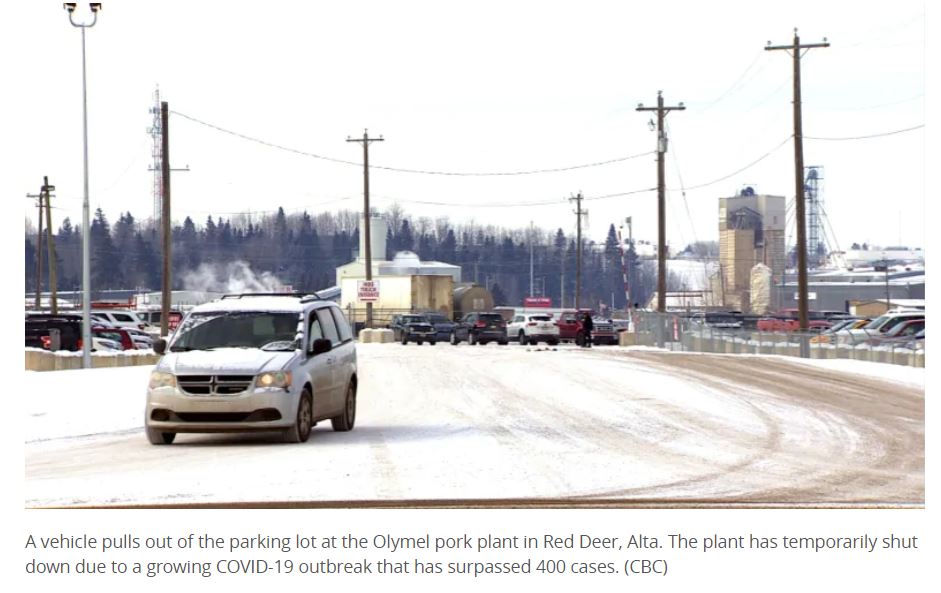 When the Olymel slaughterhouse closed temporarily last week amid a growing outbreak of COVID-19 cases, many workers expressed relief.

But as news articles about the shutdown were posted online — some of which highlighted the facility's migrant worker base — workers noticed a hurtful trend.

"There are some comments I read in the articles or the news, saying that they have to send back the foreigners to their own land," said one worker, whom CBC News agreed to keep anonymous. "It's too painful on our part."

There were 445 cases linked to the plant outbreak as of Sunday. Of those, 205 cases are active and one worker has died.

Last week, Olymel said it would temporarily shut down the plant due to the rapidly growing COVID-19 outbreak at the facility.

Prior to the shutdown, workers said they were afraid to go back to work, fearing for their health and the health of their families, several of whom described negative effects on their mental wellbeing.

Since the shutdown, workers have expressed dismay at rhetoric that seemed to frame the outbreak as a consequence of their actions while mitigating the realities of their work environment.

Workers are also currently laid off without pay and they say the financial stress is adding to tensions.

CBC News interviewed four current employees of Olymel for this story and agreed to withhold their names because they fear impacts at work, and in the community, should they be identified.

Multiple workers interviewed expressed their discomfort with an article published and later deleted by the local newspaper Red Deer Advocate.

Workers say that photo was taken last year, months before the current outbreak began and when there were no cases of COVID-19 at the plant. They say the workers pictured were not contacted by the Advocate.

"I think that's unacceptable," one worker said. "At least they could have blurred those pictures because those people, they don't know what affect they're doing with those people. Those people may experience discrimination as well."

It's not clear how long the article was up on the newspaper's website or why it was removed. It had been deleted by Feb. 12, but not before it was posted to social media by local residents, with some commenters targeting specific ethnic groups that work at the plant. 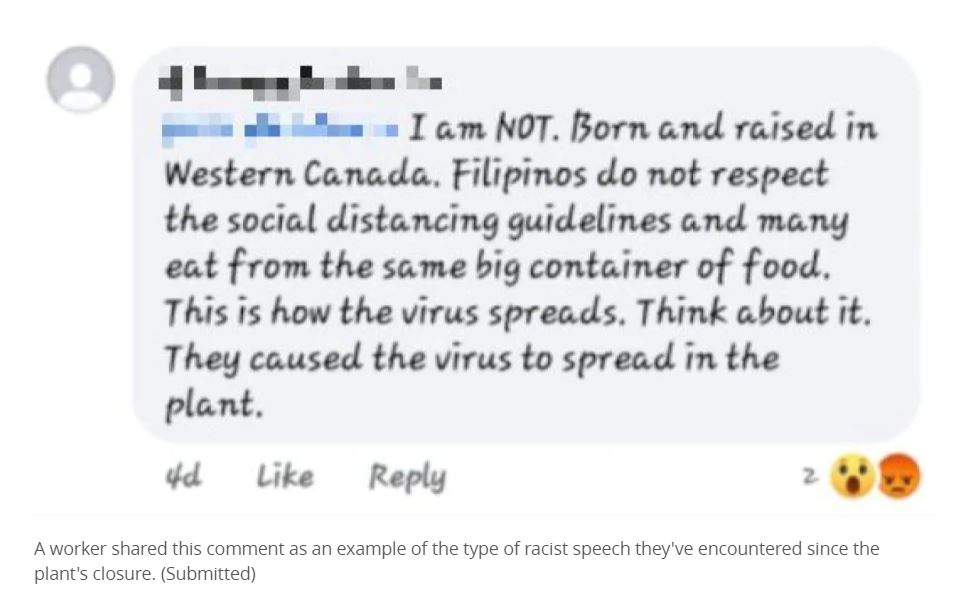 Requests for comment from the Advocate's editor and publisher were not returned by press time.

"For me, this is very disturbing, and unacceptable behaviour," another worker said. "I'm not in that photo, but I'm so mad. And it's stressing me out."

Last week, Dr. Deena Hinshaw, the province's chief medical officer of health, said the province chose not to shut the slaughterhouse down because for months the company had been successfully reducing transmission.

"It's important to remember this particular plant has had sporadic cases, one or two at a time, for several months, and the processes that had been put in place at the plant site had been very successful in reducing spread," Hinshaw said.

Hinshaw went on to say that there had been talk of declaring the outbreak closed, having initially declared it at the facility in mid-November.

"Unfortunately, I think there were a concurrence of a number of events that were not limited to events directly on that plant site, and therefore we did see an increase in cases," she said.

Olymel spokesperson Richard Vigneault previously told CBC News that the company was investigating whether an onsite potluck meal had contributed to a recent surge in the spread of cases at the plant.

One worker said he feels unappreciated and blamed, especially given how long it took for the facility to close as cases swelled.

"They did a temporary shutdown because of this COVID, but it spreads very fast inside the plant," he said. "So it means the plant is not safe for workers."

Rather than direct blame to workers, experts say there are actions companies and oversight bodies can take to reduce spread among workers and the greater community.

Paul Nicholson is an occupational health expert in the U.K. who has been appointed an officer of the Order of the British Empire for his work.

He recently co-authored an editorial making the case that chilly working conditions — like those found in meat-processing plants like Olymel or Cargill, another site of a large Alberta outbreak — put workers at increased risk of contracting COVID-19.

"When you're in a meat-packing factory where you've got people all working closely together, and that combined with the cold working environment is a perfect storm," he said.

"It is … very difficult to put in engineering controls in the short term to have an effect. So it's looking at what simple measures can they implement to ensure workers are kept warm; that's providing hot drinks, regular breaks so they can go and warm up in a warm environment, and perhaps two masks … so they are breathing in more warm air."

Nicholson said he's seen some messaging from industry associations that indicates complacency, when there's still work that needs to be done by employers to address simple health risks.

"Messages which say, that, well 'yes, there have been outbreaks but they've gone away now' — and clearly they haven't. It could be now that we are in the colder months, that combination of working in a cold environment and going outside into the cold can be causing things to escalate," he said.

Nicholson also pointed out that many regions, including Alberta, are not prioritizing vaccination for at-risk occupational groups other than health workers — despite the fact that the meat-processing industry has seen mass outbreaks that have spread into the community, reaching long-term care homes and nearby First Nations communities.

Karen Mann, director of emergency operations with the City of Red Deer, said it's vital to remember that everyone is in this together.

"We just continue to stress the importance of rallying together as a community, taking that shared responsibility for keeping each other safe … No one's to blame for the spread of COVID-19," she said.

"The changes in local case numbers, while alarming, they are being managed. And we will continue to communicate with our residents on steps that we believe they can take to stay safe."

Widespread feelings of discrimination and blame were also felt by workers at Cargill's meat-packing plant in High River, Alta., when that outbreak became the largest one linked to a single site in North America.

"People were denied access to some grocery stores and some banks, because of their affiliation with Cargill," Morales said. "And I think a lot of reactions came about because of fear."

Understanding the realities of the lives of newcomers can help to mitigate stigmatization and discrimination, Morales said.

"There was a different narrative associated with [Cargill]. And I think one can only try to ascertain, why is the narrative different? I don't want to say, 'It must be racist' — but why are we changing the narrative when the victims are different from ourselves?"

One worker who has been sick with COVID-19 for weeks struggled to speak while calling for understanding.

"We are paying taxes too. We are doing our best to work. No matter how hard it is," he said.

"We don't ask too much, but for this COVID situation, we need your understanding, support, and most is your respect and equality in this land."