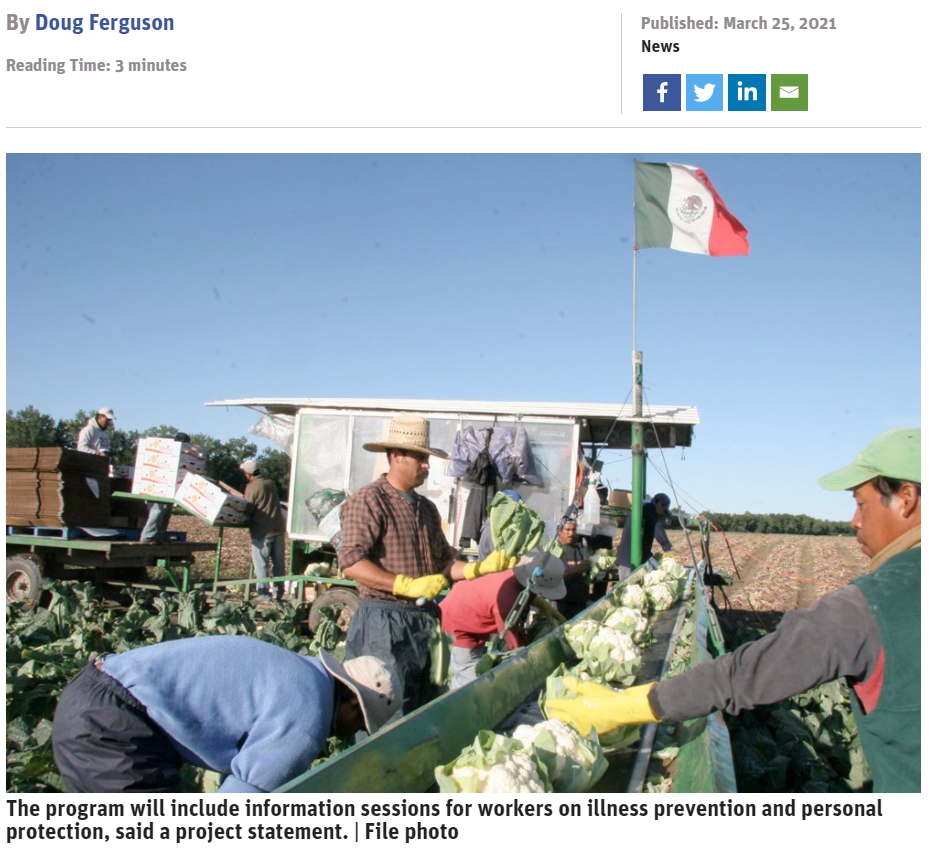 Fourteen groups across Alberta, Saskatchewan and Manitoba have partnered in a nearly $2 million project primarily aimed at helping temporary foreign agricultural workers during the COVID-19 pandemic.

“Obviously, the safety of these people is very important,” said Fariborz Birjandian, chief executive officer of the Calgary Catholic Immigration Society, which is helping to lead the initiative. It will include information sessions for workers on illness prevention and personal protection, said a project statement.

Efforts are primarily being focused on temporary foreign workers in rural agriculture because “there’s really a lot of our food chain that relies on these folks,” said Dina Jubrak, a case worker who helps such people for the society.

The workers are from countries such as Mexico, the Philippines, Thailand and Trinidad and Tobago, she said.

Birjandian said many work on farms and other agricultural operations in the prairie provinces for up to five months each year before returning to their home countries.

“Now with COVID, everything has changed, so we have to really make sure the health and safety is in place at the airport, their journey (to their employer), their housing, their workplace, and also have preparations if something happened — if they get infected, how are they going to deal with that? The testing, the isolation, all those things are being taken care of in this program.”

The initiative, which was signed on Dec. 17, is expected to serve about 2,000 people in about 12 locations until July 31, he said. Many of the workers have been returning annually to the Prairies for up to six years, he added.

Some workers needed services earlier than usual this year because they were forced to stay over the winter in Canada because of travel restrictions caused by the pandemic, “so they’re here for the next season essentially already,” said Jubrak.

Canada’s agricultural industry is “highly dependent on temporary foreign workers,” accounting for 20 percent of all employment in the sector, said a statement from Statistics Canada. The horticulture industry particularly relies on such workers for fruit and vegetable production and greenhouse and nursery operations, it added.

About 50,000 to 60,000 temporary foreign workers are typically employed each year in Canada in agriculture and food and fish processing, said the statement.

The majority are located in Ontario, Quebec, British Columbia and Nova Scotia. There were 1,900 jobs filled by workers in Alberta in 2018, along with 447 in Saskatchewan and 579 in Manitoba, collectively amounting to about 10 percent of the national total.

Three workers died last year in Ontario due to COVID-19 outbreaks on farms. The crisis prompted the federal government to boost funding that year by nearly $59 million to help protect the health and safety of temporary foreign workers by improving things such as living conditions.

However, the Cooper Institute in Prince Edward Island said such measures did not address what it viewed as a skewed relationship that left workers largely at the mercy of their employers.

Mexico briefly paused a Canadian federal program for such workers in 2020, with the country’s ambassador warning that any farm that failed to follow pandemic safety rules would not receive Mexican workers.

Birjandian said farmers must provide different housing for workers this year to prevent outbreaks, as well as changing things such as how they are being transported.

“As far as the relationship goes, I know there are amazing employers, there are some bad employers that take advantage,” he said.

“The same goes with the temporary foreign workers as well — amazing people that come here to work hard, to save some money, and there are other people that have different agendas.”

Workers will be informed under the program about their responsibilities as well as their rights. It is vital they understand protocols meant to keep them safe, but also to help prevent outbreaks in small farming communities or rural food-related industries, said Birjandian.

Such concerns led to the project being funded for the first time by the federal Employment and Social Development Canada instead of relying on limited provincial funding, he said.

Alberta will vaccinate 2,000 employees at Cargill ...
Q&A: Reunification and domestic violence in the Fi...