Q&A: Reunification and domestic violence in the Filipino community

Francia Bodoso is a social worker with Calgary Catholic Immigration Society who counsels Filipino couples, parents and families dealing with conflict in their relationships.

On Friday, she's speaking at a virtual forum about domestic violence in her community hosted by the Philippine Consulate General in Calgary. Ahead of that, she spoke with the CBC's Danielle Nerman about the issue.

You can hear their conversation below, or read through an abbreviated version. Both have been edited for clarity and length.

Danielle Nerman: The victims you work with, the families you work with...are there commonalities among their experiences that are unique to the Filipino community?

Francia Bodoso: We call it the reunification issue or the separation issues. These are situations most Filipino families have experienced, because they've been separated for a while from their husbands or wives. And the other partner will actually come and work in Canada. And that separation, that number of years of being separated, could have an impact on their relationship when they get back together.

And for me, I can see that that's very distinct to our community, given that we have so many temporary foreign workers and live-in caregivers and this immigration route will not allow us to be reunited with our families. Usually it's about seven years before the family can be reunited and that amount of time is actually a lot and has a big impact on the family.

Danielle Nerman: So what stories are you hearing? Can you give me some examples?

Francia Bodoso: I think the most common story we encounter, and this is not specific to the Filipino community, is that hurting a partner, physically — in some cultures and mostly in an immigrant family — is acceptable. In my community, men are allowed to hit their women. And when they come to Canada, although they are aware that it's not acceptable, that it's not allowed, that mentality is still there. That masculinity, that toxic masculinity is still there. So that's a common situation for our women.

Danielle Nerman: What are you hoping will come from this session that you're going to be speaking at on Friday? 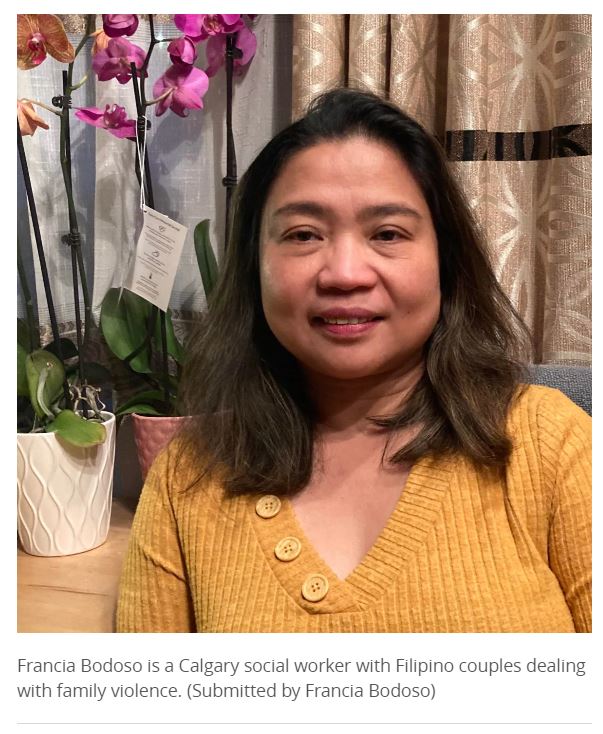 Francia Bodoso: I think educating people about what is domestic violence will, hopefully, prevent these issues from happening. If couples are not happy with each other, they just have to decide to separate and then talk about co-parenting and how the custody of children will work. And to be honest, right? But a lot of times that's difficult because back home, where 85 per cent of us are Catholic, the teaching is that we should not separate. We cannot separate from our partners, from our husbands. And when we do that, that can be very shameful. And so, a lot of us don't want to talk about it.

Danielle Nerman: And this is related to the Filipino core value of hiya? (Note: In Tagalog, hiya means "to feel shame or embarrassment.")

Danielle Nerman: How is it problematic sometimes to have a core value like that?

Francia Bodoso: It is problematic because it's not easy to change those perspectives. I mean, I'm sitting down in a counselling session and just explaining to them how it works here and they can say to me, 'yes, I understand.'

But I know deep down that it's not easy for them to accept it. And it takes, probably, another generation to change that perspective and that culture of hiya.

Francia Bodoso: It's a system issue. When we talk about the immigration policy that we have right now for a family to be reunited, it will usually take about five to seven years. And that is a very long time for a child not to have both parents and for that couple to be separated, right? So if we can influence the system to change so that temporary foreign workers and live-in caregivers can come with their families, then we will prevent these social issues. I know that with the live-in caregivers, they changed it to two years. You can apply for your permanent residency after two years. But not temporary foreign workers. [For them] it's still about four to five years before you can apply for your permanent residency.

Danielle Nerman: And it's not until then, that you can bring your family over?

Francia Bodoso: Correct. But I can see that if the policy here would change, once a temporary foreign worker is allowed to come and bring his family — that would actually prevent those conflicts or issues in the families.

Prairie program set up to help foreign workers
Exiled: Syrians in Canada look back on 10 years of...