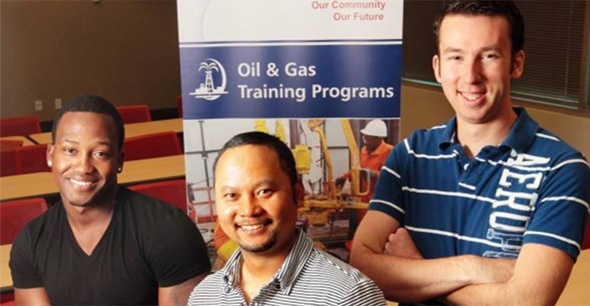 Shiva Tamana didn't know much about the oil and gas industry when he and his family, originally from Nepal, moved to Calgary from Toronto at the beginning of the year.

Nine months later, the 34-year-old has just graduated from an innovative industry program and is mulling over job offers to begin his career as a rig hand.
"The future looked bright in the oil and gas industry," a beaming Tamana said Wednesday. "I am so proud to be part of it, and thankful to be in Canada."

Tamana was one of 16 graduates of an innovative oilpatch training program held once a year by the Calgary Catholic Immigration Society with support from oil and gas companies.
The new grads will be sifting through at least 68 job offers over the next few days from an industry already caught in a labour crunch - months ahead of the busy winter drilling season.
"Every one of these grads we want to hire, but it's a drop in the bucket for what we are going to need," said Cindy Hames, director of global field resources with Ensign Energy Services.
The drilling, oilfield service and trucking company will hire more than 1,000 people specifically to staff their drilling rigs this year, Hames said.
Ensign has been involved with the program since its inception a decade ago, working with CCIS on developing sessions to meet industry needs for drilling, service and seismic crews. The 15-week courses are routinely oversubscribed and limited only by funding, say organizers.
Prince Motlokwa, 27, came to Calgary via his home country of Botswana and England, where he attended college. The lack of opportunity in Botswana propelled the ambitious man to Canada in 2007, and Calgary in 2009.
Motlokwa heard about the drilling training from a friend and squeezed in his application just under the wire, literally handing it in as the program head was taking his shortlist to the office. After trying his hand at various jobs in Canada, Motlokwa said he felt the right fit in the oil and gas industry.
"I want to make a career out of this and go advance myself and take advantage of the possibilities," he said, from oilpatch safety association EnForm's headquarters in northeast Calgary.
One of the biggest challenges the industry has is getting people to understand they can make long-term careers in the service sector, noted Brad Kingston, with Savanna Energy Services.
Savanna Energy was the first company to put private equity into the CCIS program, said Kingston, vice-president and general manager of well servicing division. He said the company, which has a fleet of 216 drilling and service rigs, grapples with having rigs without crews "every single day of the week."
"The worker shortage is very bad," he said. "We have been able to attract entrylevel workers, but mid-and upper-level workers with experience are extremely difficult to get."
Venezuelan Christian Scagliati sees a career for himself in the industry which he says suits his desire to work outdoors and get ahead in Canada.
Scagliati, 23, admits to first being attracted to the money even rank newbies can earn working on an oil or gas rig, about $50,000 a year, according the latest recommended wage schedule.
"They pay me well to do this physical job," he said. "But the principal reason that brought me here was to help support my family."